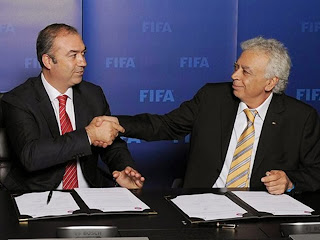 The Cyprus Football Association and the breakaway Cyprus Turkish Football Association have reached a historic pact that will see the KTFF become a member of the CFA. KTFF president Hasan Sertoglu (above, left) shook on the deal with his counterpart Costakis Koutsokoumnis (above, right).

Blatter and UEFA president Michel Platini also both signed the arrangement, which - in the interests of transparency - has been made public and includes seven specific patrameters, in including offering UEFA development for coaching and positions for KTFF personnel within the CFA, showing how football can overcome hurdles that politicians find unable.
Both sides stress that what has been achieved is not an agreement but an arrangement. Jerome Champagne, formerly Blatter's deputy general secretary and now an advisor to the KTFF, hailed the deal as a "milestone" and equal to anything he achieved at FIFA, but added: "Now we have a lot of work to do to make it work on the ground."

If an agreement is achieved, this could open up ways for clubs in the north, such as Cetinkaya, the last North Cypriot side to win the all-Island title before the two sides split back in the 1950s, to return to playing teams from the south of the island in the Marfin Laiki League.

Before the split, Cetinkaya played in the centre of Nicosia but that ground (pictured below) has fallen into disrepair. Right on the United Nations' monitored Green Line that separates the two communities, the ground is only usable for training. 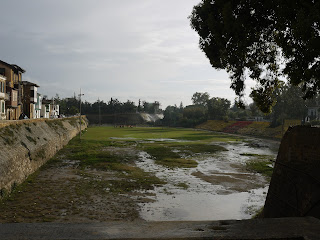 Now, Cetinkaya play in a larger more modern stadium (below) but there is a long way to go before the Ataturk Stadium hosts matches in the Marfin Laiki League, which includes sides such as 2012 Champions League quarter-finalists APOEL. 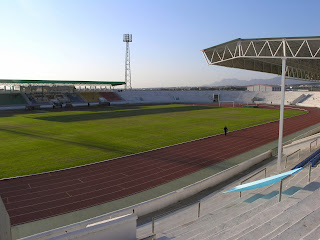 This is partly because the steering committee formed by the two associations, which crucially has equal representation from the CFA and the KTFF, has to fine tune the agreement. The chances of Cetinkaya (training below at the old ground overlooked by a UN watch tower) playing against APOEL next season must surely be slim. And when they do, there will be a huge financial gap. APOEL's 2012 Champions League run earned the club €18.1m in UEFA prize money. 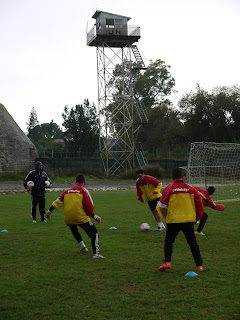 In contrast, all the clubs in the north are only part-time and the most any side turns over is only around €500,000 a year. According to a University of Nicosia study from 2007, the poorest club in the Marfin Laiki League had annual revenue of €744,319. The recession that has hit Europe will have made bridging the financial gap between the two sides easier and the prospect of money spinning games with the likes of APOEL and Limassol will though certainly help close the financial disparity.

The arrangement allows for Turkish Cypriot sides such as Cetinkaya to play friendlies abroad and the prospect of a game with a big side from Turkey such as Galatasaray visiting the north is certainly likely to draw more fans than a game by the peripatetic North Cyprus national team. A year ago, 1,400 Turkish Cypriots crossed the Green Line to watch Fenerbahce play Limassol in a Europa League Game in Nicosia (pictured below). Despite pre-match fears of inter-communal violence and a large police presence, the game passed off peacefully. That illustrates the potential for matches in the north involving bigger teams from Turkey, who are infinitely more popular than the 'national team'. 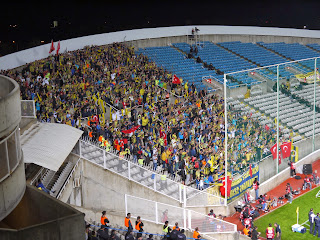 Contrary to some reports, the new arrangement between the CFA and the CTFA will not see the Northern Cyrpus national team play international friendlies as both sides are sticking with the UEFA and FIFA membership criteria, which stipulates one member one association. Anyone at the 2007 ELF Cup in the north could testify that the notion of a Northern Cyprus national XI was not one that had much mileage in a place where the big three Istanbul sides - Galatasaray, Fenerbahce and Besiktas - have significant support.

The Northern Cyprus XI did enter last Year's Viva World Cup - a sign of the detente that has descended on football relations in Cyprus. Should Northern Cyprus start entering these sort of competitions, that could disrupt an arrangement that has taken significant time and will surely benefit footballers of all persuasions in the north far more than the notion of a 'national team' ever will. 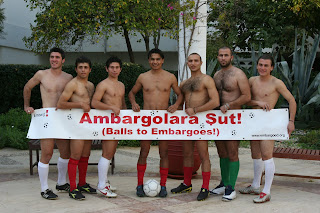 This support stretches from clubs such as Cetinkaya using FIFA's transfer matching system to sell players overseas, to playing friendlies against foreign clubs. While at the opposite end of the game in the North, Turkish Cypriot coaches will be able to qualify for the UEFA coaching badges and provide the modern, sophisticated coaching to young players.

Some politicians in the North and in mainland Turkey may not like the idea of a Northern Cyprus team becoming little more than a regional select, but that is what is likely to happen. Crucially, parameter six of the arrangement stipulates that either side can terminate the agreement at any time. Sending a 'national team' to any competitions could easily provide the CFA with an excuse to do just that. Kosovo have kept out of non-FIFA competitions for just that reason and Northern Cyprus would seem likely to do the same going forward.

As part of the agreement, Northern Cyprus will be able to enter a side in the UEFA Regions Cup and that seems the most likely route, leaving the north on the same footing as the Channel Islands and the Isle of Man. Football as a whole in Northern Cyprus is no longer an Outcast, but the national team is surely history.
Posted by Steve Menary at 16:13