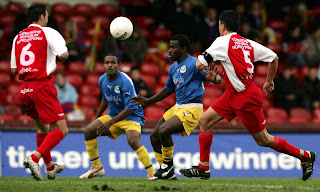 The following article was published in the September 2008 issue of Australian football magazine, Soccer International. A shorter version is on the Sportingo network & was picked up by other sites, including Kosovocompromise

This September, Europe’s national teams start their qualifying matches for the 2012 World Cup with their newest member – – joining the chase for a place in .

THE ‘NATIONAL TEAMS’ THAT FIFA FORGOT

Commonwealth of North Mariana Islands – When a US soccer Dad went to work on this isolated group of islands most famous as scene of bitter World War two battles, he tried to find a match for his teenage son and ended up starting a national team

The Channel Islands – Before New Labour came to power, Jersey and Guernsey probably had more autonomy than , or and are looking to take that independence onto the international football stage

The Falkland Islands – Has a four-team league but opposition from means that the islanders only outings are sporadic appearances in the football tournament of the bi-annual Island Games, a sort of mini-Olympics for islands

Greenland – Sitting on the top of the world, Greenland is, like the Faroe Islands, part of the but politics has so far stopped the Greenlanders emulating the Faroese and joining UEFA and FIFA

– Nothing to stop the tiny Mediterranean principality joining UEFA but doing that might mean the only Monegasque club, former Champions League finalists AS Monaco, might have to leave the French league, which has so far scuppered the national team’s ambitions

Occitania – A team representing speakers of the medieval romance language, which is still spoken in , and . If you can speak Occitan, you can play regardless of where you come from

The Sami – a team drawn from the Sami tribe of Scandinavia, whose members – more commonly known as Lapps – are scattered across , , and

– A team drawn from the Tibetan Diaspora, mostly in and , which tries to play matches across the world despite massive opposition from

Turkish of – top half of Mediterranean island that was invaded by and declared itself a state in 1983. Unfortunately, no-one also noticed
– Played football since 1924 only for the African island to join with and become in 1960 but recent reforms have seen a push for greater autonomy on the football field.

*‘Outcasts! The Lands That FIFA Forgot’ by Steve Menary is published by Know The Score Books. The book does not have an Australian distributor at present and can be bought by contacting the author through the website http://outcasts-book.blogspot.com
Posted by Steve Menary at 11:08